It's the year of the 'earth pig' and chinese folk astrology says that people born in this year will show themselves to be honest, reliable, thoughtful, home-loving talkative people, though they easily tire when overdoing things. Beware of the earth pig's manipulative nature, and they can be very self-centred!

master acupuncturists know this year as a 'chi hai' year.

Chi relates to the yin of the Earth element and so in this new year there is a deficiency of organic energy, and the quality of this energy is slow and patient. If you were to look for an example of this kind of organic energy in nature then you need look no further than the turtle.

Hai relates to the symbolic energy of the pig, a creature lazy by nature but prone to bouts of excessive activity.

So, putting these two energetic scenarios together - slow and patient with lazy and intense - results in a relationship that produces a phlegmatic nature that is occasionally punctuated with periods of intense activity.

Alchemically, as all master acupuncturists know, deficient earth energy will produce excess wood energy according to the ke cycle of five element theory, and in so doing strengthens the grasp on physical and conceptual movement, ameliorating the seeds of lethargy and apathy.So, in this new year, the advice on health, wealth and happiness might well be:

Health: The missing organic energies in this new year are the lung, colon and gall bladder energies. With the Earth element deficient there's an obvious need to strengthen the Metal element as according to the sheng cycle of the five element model 'Earth feeds Metal'. Strengthen the lungs through exercise and perhaps have a colonic irrigation (or at least have a detox diet for a few days every season). Keeping active will also help to stimulate the gall bladder energy (a function of gall bladder energy is to 'gather and nourish the tendons and ligaments').Physical activity needs to be planned in a 'chi hai' year. It helps in strengthening the missing Metal element and the missing Metal deep energy for the year. The best exercise of all in this year is walking.

Wealth:So, this is a new year in which the energetic seeds for financial success are being sown.Whatever the enterprise,provided it is properly planned and managed, there is a greater chance of monetary success in this year than almost any other in the alchemic sixty year cycle!Excess Wood energy for this year suggests increased growth for the year over previous years.

Gold and silver increase in value whilst land and property values stagnate.


Happiness:
For master acupuncturists happiness is achieved through harmony, both within and without.Stimulating the 'four gates' using acupuncture on the eight auspicious days of the new year isone way to harmonise in any year.
For this new year we can all help to harmonise ourselves by taking on some of the above mentioned characteristics for someone born in an earth pig year.
Then there is an acupuncture point that is 'the gathering point for nourishing tendons and ligaments' and that happens to be a gall bladder energy point, a missing organic energy in this new year. We can all stimulate it by using fingertip pressure at the point: 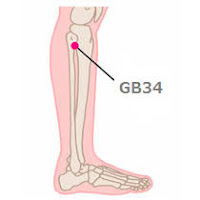 This acupuncture point - GB-34 - is the celestial stem energy balancing point for an earth pig year.

The Climate in a chi hai year is naturally much wetter than average.

To begin the year, there will be increased wind and flood events, with a cooler than average beginning to summer. Summer ends warmer than average and the warmth extends into autumn. Winter begins with more extensive flooding, cold slowly increases but this is not a harsh winter.

The 'chi hai' year brings a degree of stability not experienced for some years, and prepares us for the tumultuous year to come: the year of the metal rat.