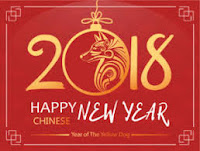 it's the year of the 'earth dog' and chinese folk astrology says that people born in this year will show themselves to be affectionate, generous, communicative, home loving though serious workers, and full of energy. Beware of the earth dog's barking nature, though this is a dog who's bark is worse than it's bite!

master acupuncturists know this year as a 'wu hsiu' year.

Wu relates to the yang of the Fire element and so in this new year there is an excess of organic energy, and the quality of that energy is excitable and demanding. If you were to look for an example of this kind of organic energy in nature then you need look no further than a wildfire.

Hsiu relates to the symbolic energy of the dog. Any dog owner knows that a dog can be very affectionate and loyal if it's needs are met; equally, they soon let you know when they feel neglected.

So, in putting these two energetic scenarios together - excitable and demanding, emotional and needy - results in a relationship that produces a dramatic nature that is steadied through being centred/balanced/grounded.

Alchemically, as all master acupuncturists know, excess fire energy will produce deficient metal energy according to the ke cycle of five element theory, and in so doing weakens the grasp on physical reality and the things of the physical world, only to increase an intensity of being.

So, in this new year, the advice on health, wealth and happiness might well be:

The missing organic energies in this new year are the lung, colon and gall bladder energies. With the Metal element deficient ther's an obvious need to strenghten the lungs through exercise and perhaps have a colonic irrigation (or at least have a detox diet for a few days every season). Keeping active will also help to stimulate the gall bladder energy (a function of gall bladder energy is to 'gather and nourish the tendons and ligaments').

Physical activity needs to be increased in a 'wu hsiu' year. It helps to burn off excess fire energy and it stimulates the Wood element and Wood deep energy, which are both missing in the alchemical chart for this new year.

So, this is a new year in which, to be on the safe side, you need to try and hold on to what you have!

However, it's also a year that tempts one to try one's luck!!

Investing in currencies and mining should be avoided (metal energy is weak throughout the year).

For master acupuncturists happiness is achieved through harmony, both within and without.

Stimulating the 'four gates' using acupuncture on the eight auspicious days of the new year is
one way to harmonise in any year.
For this new year we can all help to harmonise ourselves by taking on some of the above mentioned characteristics during an earth dog year.
Then there is an acupuncture point that 'harmonises the interior and the exterior' and that happens to be a gall bladder energy point, a missing organic energy in this new year. We can all stimulate it by using fingertip pressure at the point:

The Climate in a wu hsiu year is naturally much hotter than average, especially in the high summer season and throughout the autumn. Famine through crop failure is likely to increase. As will wildfires.
The best case scenario is a wet spring, a great long summer, virtually no autumn followed by a hard winter.
The worst case scenario is catastrophic fire due to volcanic activity etc.

The 'wu hsiu' year brings an abundance of vibrant, passionate energy that moves forward, with an intensity, the fruits of the previous year.