beginning at the beginning - with the secret of life!

and what better subject to start my blogging life with than one that goes back to where it - life itself - all started. and not only that, a subject that explains why those that know are considered to be master acupuncturists. yes, you guessed it (did the title give it away?), it's the very secret of life itself.

ok, I could be elitist, esoteric and occultish by saying that the secret of life is 'li qi xu'.

or I could be a bit disingenous and say that the secret of life is not the same as the secret of the meaning of life (which of course we all know is 'the meaning you give to your own life')!

or, I could do the unthinkable and just say it as it is, in as plain as english as can be said.

well, it's you the reader that will decide which of the above to vote for after all is said and done, but my intention is to pitch this blog along the lines of common sense, although a bit of mystery and intrigue is likely to surface from time to time considering that I was taught this version of the 'secret' by my master, a man who some said was at one time in his life the high priest of the freemasons in the UK.

be that as it may, I will start by demystifying 'li qi xu' - in modern english this means 'the right rythm, the right proportion, the right number'. so, the secret of life is evocative of vibration - you don't exactly see it, but you can work out that it exists from looking at the patterns that it creates.


it's pure form is symbolised by the sine wave

it's conceptual form is symbolised by the spiral 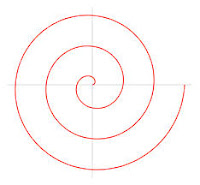 and the latter becomes the five element symbol 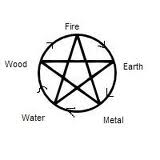 
now if all this sounds a bit like we're entering wave particle theory territory in quantum physics, think on. the concept of energy creating, controlling and nourishing the particles of form was thought up 5000 years ago by one Fu Hsi (c.3322bc), the first of the three legendary emperors of China, and it is said that he was the first freemason (the set square and compass symbol date back to his time and place!). Fu Hsi described the Universe in perfect rythm with his now famous trigram arrangement 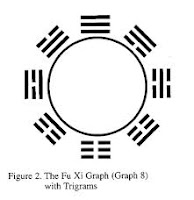 along came Shen Nung, legendary emperor number two, and one of his achievements was classifying all things in terms of yin/yang, or as we think of these days, in terms of proportionality. this led the way for the third legendary emperor of China, Huang Di (2697-2574bc) to come to a complete understanding of the secret of life...a mastery of vibration in the organic universe. one of the first written books known to man was entitled 'Huang Di Nei Jing' ('the yellow emperor's classic on internal medicine'), and within it's pages lies the secret of life and how to use it for health & harmony!

what Huang Di had done was work out the vibrational patterns of the forces determining movement in time and space. he called these patterns 'the cycles of life'. we know them better as circadian rythms. he had also worked out that the external patterns of the universe and the internal patterns of a human were like reflections of each other in their construction, generally, and that if one looked more closely at these patterns it would be possible to identify, isolate and regulate individual characteristics.


it seems that the secret of life operates in the seen and the unseen, the subtle and the gross,  alike!

now, as a clinical acupuncturist, I am more interested in and excited in blogging about all things acupuncture.
so expect plenty of this in my future blogs. however, if I get enough positive feedback from this blog on the secret of life then it could become a regular rolling feature of future blogs. let me know guys. thanks.